THE SPELL OF THE ROSE 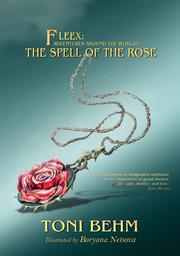 In the Lowland valley, where it’s always autumn, is the village of Fogland. Fleex of the Hatters clan goes to meet his love, Fin, and reveal his feelings to her. Like all Hatters, Fleex wears a special cap of tentacles that move to reflect the wearer’s inner self. His tentacles form red hearts, and so his nickname is “Roseheart.” But while sitting with Fin in a cafe, Fleex learns that she’s upset. She has started remembering her life before entering Fogland—and those who tell more than one person their remembered past will be whisked away by fog forever. Fleex listens intently about Fin’s two suitors in Richland: the poor Dane and the wealthy Chaz. Unfortunately, the Gossiper, a pumpkin-shaped creature, eavesdrops above them, causing fog to surround Fin. Meanwhile, in the Nebula of the Gods, Fog Almighty sends Flip and Flop, two tiny Greenies, to help Fleex, the chosen one, “walk through the door to Other World” and ultimately restore balance to the Universe. Also at work is Master Lou, a cosmic collector who’s become greedy. Can Fleex bring Hope back to the Confused World, return the Goddess Afafa to the Enchanted World, and reunite with Fin? Behm unleashes an imaginative whirlwind in her exploration of grand themes like faith, destiny, and love. At one point, Afafa asks: “What is a god if nobody believes in them?” Fantasy fans will encounter things utterly new to the page, like the octofruit, a pineapplelike plant, loyal to its master, that has edible innards and spidery legs that help it escape tough spots. Violence is minimal except for a scene in which a deadly musical instrument induces “fits” and people’s “faces were twisted and deformed” and “foam came out of their mouths.” The only drawback to the author’s storytelling is that many fantastical elements pile up on the narrative roadside, barely used (the “Magic Limitation Act,” for example). The book includes gorgeous color illustrations by Netsova.

Books I Read in January

The 22 Most Anticipated YA Books to Read in March